These are standalone dark fantasy novels set in Perilisc. The settings and story lines are separate from each other, but the cast of characters does have a slight overlap.

Chaste: Grasp of the Fevered Father
When her devout parents were killed, Cheryl abandoned her destiny as a priestess. Despite the unusual decrees of the new priest, an evil threat preys on the town. Tragic murders have become more frequent when a few traveling warriors stop here for the night. Will they help Cheryl’s village or destroy it? She knows better than to trust them. Years of pain and self-loathing have hardened her. To fight back the infectious curse that plagues her home, she must finally face her brutal past.

Liefdom: Path of the Monstrous Prince
A zealous guardian in a peaceful city, Gentry Mandrake is a fairy unlike any other. Cast out and hated for his differences, his violent nature makes him wonder at the purity of his soul. He hunts for belonging while fighting to protect the human child bound to him. Explore the mythical realm of The Veil, the grating torture of the Sulfur Fields, and the biting tension between power and purpose in this wondrous struggle against a demonic wizard and his denizens. Can Mandrake overcome such terrible foes to defend those he loves?

Legends of Perilisc
This collection of short stories features myths and lore from Perilisc, a unique fantasy setting. Journey deeper into its history. Struggles of royalty, immortal love, unruly wizards, lost heroes, blistering vendettas and more, provide gripping insight into the scope of this realm.

Mestlven: Wrath of the Jeweled Lady
Revenge, Insanity, and the Bloody Diamonds

Meredith Mestlven was abused and betrayed by her nobleman husband. After a desperate fit of retaliation, she fled for her life and lost her sanity. Now nearly 20 years later, she returns to her home at Sorrow Watch to destroy her enemies and reclaim her jewels. How far will she go to satisfy her revenge? Dark, cunning and beautiful, Mestlven will win your heart or devour your mind. 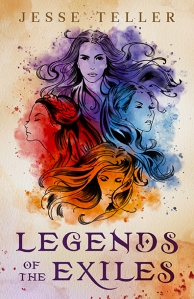 Legends of the Exiles

The isolated barbarians of Neather have deep ancestry and strict traditions. Four resilient women defy tribal customs as they fight to overcome their own tragedies. Abuse. Addiction. Assault. Grief. What struggles can they endure to defend their hopes and their hearts?

Helena seeks a love as bold as she, yet finds the men of her village lacking.

Jocelyn fears her strange visions and sacrifices a life with the man she loves for the one her destiny demands.

Torn apart by abuse and grief, Ellen is a brilliant woman who must focus her intellect on finding reasons to persevere.

Rachel, a brash girl of noble heritage, dares all men to challenge her and longs for one who will.

In this set of four interwoven novellas, award-winning author Jesse Teller challenges assumptions and showcases the strength of feminine resolve.

Legends of the Exiles is available on Amazon.

Plus
The Goats of Breastion

Breastion Flurryfist loved goats. As chief of his mighty tribe, he decreed no one harm a single hair on these precious creatures. When he died, his wife slaughtered and fed his goats to the tribe at his funeral feast. The men began a song that lives in infamy on the mountains of Neather. So grab a mug and toast to the fallen Flurryfist chief, with the ballad of the Goats of Breastion!

The Goats of Breastion is available on Amazon.

If you’d like to strum along, here are sample chords.