In October 2019, I released the first book in a new series, The Madness Wars. I have been working on it for eight years. This series is huge, a sweeping five-book epic about a war fought between a military state, bent on domination and destruction, and a nation steeped in history and lore.

If you’re the kind of reader who likes to know all the relevant character backgrounds, I recommend reading Chaste, Mestlven, Legends of Perilisc, and the story “The Land of Rott and Cur” from Blackest Knights. If you have no prior experience with my world, you can start with The Madness Wars. This series was created to stand on its own.

The entire epic series is written and will be released one book every six months until the final installment on April 15, 2021. Here’s how each book is progressing: 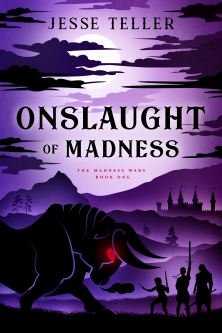 Onslaught of Madness (Book One) now available on Amazon.

The Drine war machine needs to be constantly fed and has turned its sights on Tienne. Warlord Rextur devoted his life to planning this invasion, so how did he lose the element of surprise? And who is this emerging rival Peter Redfist? He can’t be much of a problem. The god of destruction has long favored Rextur. His faith is strong and his legions mighty. Who could withstand their onslaught?

To save her sanity she must give up her soul.

With rare exception, Raendel took everything she ever wanted. Now her vicious thieves guild is festering around her. Through paranoia and insomnia, her grip on reality crumbles, and a crisis leads her to a desperate choice—face retribution or serve a creation of pure evil.

The militant forces of Drine march across Tienne, destroying and enslaving all they face. As the last few nobles struggle to organize a resistance, a rich network of merchants declares themselves rulers of Tienne. Warlord Rextur finally catches up with Peter Redfist and his refugee forces to clash in devastating battle. Who will be left to pick up the pieces? Does the ancient nation of Tienne have any hope of survival?
Current page count: 836
First Draft: Done
First Round Rewrites: Done
First Round Editor: Done
Second Round Rewrites: Done
Second Round Editor: Done
Proofreading: Pending
Cover Reveal: The Fantasy Hive
ARC ebooks for reviewers.
Pre-order now on Amazon.