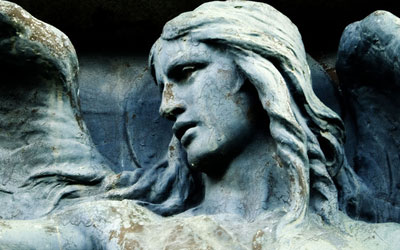 High school had left me reeling. I wanted so badly to go to college, but this was not a dream I had until my senior year. Mrs. Learmann set me on fire with literature and the school newspaper, and with that flame searing my insides, I wanted an education. But the time passed on. Senior year sped by quite like senior year always does, and when I looked up, school was over and I was left behind.

When I left school, I had no idea how to do even the slightest thing to get into college. I didn’t know how to take the tests I needed to take. I had no clue how to get financial aid. I was helpless and scared. I saw a life without learned pursuits, and I was stuck.

I began shutting down, closing myself out. Work and home, bed and very little else, I began moving through my life unfeeling. Apathetic and lost, I looked forward to nothing. I was dead inside, and I had little in the way of hope.

That is when he came.

I was sleeping, deep slumber brought on by the night shift and depression. I was nowhere near my waking time, and I lay in bed, closed off to everything. Then I was not alone. There was a being in my room, and I looked up with awe and fear in my heart.

It was man-sized but much larger than any man had ever been. It was violent in its beauty and its power, but it was a being of supreme peace. It was perched on a stack of foot lockers at the end of my bed. It looked at me with fierce brown eyes and a soft face of solid stone. It was not of this place. It stood, opening massive green wings and stretching its arms to the sky.

I drew back in horror. I dropped from the bed and cowered, terrified. Mewling for mercy, I waited for punishment, for I knew this creature. I knew it before its wingspan erupted in my room. This was the archangel Gabriel. He had rained fire and brimstone on Gomorrah. He had fought the legions of Lucifer. He had the wrath of God within hand, and it would be his trumpet that brings the end of the world to man. He turned his eye to me and I saw about his head a wreath of flame. I saw a gaze so lovely and so terrible that to stare upon it was to invite death or insanity. I could not look away.

He pointed at me and my fear was swiftly banished. He flexed his wings, and the walls and ceiling bowed out and away, as if there was no hope of the room holding him. He looked at me and I folded my hands. I waited for a word, a command, a whisper, any sign at all of why this creature had come to me.

For a long time, there was no sign of intent, no notion of why he had come to me or what he wanted. But after what could have been a year or the blink of an eye, he spoke with a voice of thunder and wrath. He spoke with a whisper so sweet. He gave me a command I was helpless but to follow.

“Wake,” he said. It was a simple thing to say. It was a terrible thing to attempt, for in that one word he called me forward. Out of my shell and unhappiness, out of my torpor, out of my trance. He commanded me to step out of myself and go forth, become a member of the world and no longer hide within inactivity and fear.

He began to glow, and within a moment, he burst into flames. An energy beyond anything I had ever imagined shot out in all directions, and I hid my eyes in fear and awe. He was gone. I looked around, searching for any sign of his presence. But none remained.

I stayed my knees, waiting for anything, but nothing came. I waited to wake from this dream, but after many minutes, I realized I was not sleeping. I dressed and went out into the world.

The sun looked different. The ground trembled under my feet. The darkness of my heart had lifted, and when the soft breeze of the coming spring caressed my face, I felt a flutter to my heart I had not felt in years.

I invited people into my world again. I sought old friends and reached out to the people around me. I joined a church and touched lives in a positive way. Within a few months, I found the woman I would marry and my life changed.

I have been told I was sleeping. I have been told I could not have seen what I saw. Many people have looked at me and nodded with doubt and distaste in their eyes. Christians have shamed me. Nonbelievers have laughed at me. You may be laughing at me now. But every now and then, I find another soul, a person walking through my life, or setting up shop there, who hears my story and believes me. Every now and then, I speak of the Horn Blower, and see light spark in the eyes before me.

To that person, I say his word. “Wake.” Seek the life that travels past you. Reach out to a hand drifting by. Find a soul for you to walk with and look at the world around you. Feel the ground tremble. Watch the sun blaze, and look to the sky.

5 thoughts on “The Horn Blower”