Julian Fernandes lives in Denver Colorado with his wife. His first published works will be released this June by Endless Ink Publishing House. He has contributed to their series Earth’s Final Chapter. With family ties to Portugal he is also excited that the series will be translated in Portuguese. 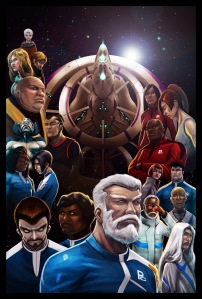 Why storytelling? What made you yearn to tell a good story, and how long was this story within you before it came out?

Storytelling is powerful. It came natural to me, and it helps me unleash my creativity. I was thinking about the series “Earth’s Final Chapter” since 2008, but the story for Book 1: Avinon came more into focus around 2012. I started putting pen to paper just over six months ago. I always had Book 2: Captain Taylor: The Starship Ceu in mind because it introduces the large overall story arch.

What is it about your genre that speaks to you?

I love the sci fi /fantasy worlds because of the open acceptance of the odd and unique. It gives me free range to let my characters experience any situation I can come up with.

Without giving any spoilers, what is your favorite thing about this book?

My favorite part about Book 1: Avinon is that it is unexpectedly gory in parts, but not in a distracting way. I also hope that I created a story that keeps you saying, “Didn’t see that coming.”

What character from your book fills you with hope?

The youngest character in the book, Tone, gives me hope. He is kind and sensitive, but has a strength you will only find in an eight year old that lives in a post-apocalyptic world.

What character from your work frightens you, makes you feel dirty to write?

More than a particular character there is a group that represent the NOW or elitist power called the Planetary Council. The represent the self-motivated and self-preservation that can really turn the gut.

Your main character walks into a bar. What happens?

Avinon would us his invisible cloaking device. Unnoticed he would go to the bar. Stealing tech, killing a mark, an unforgotten revenge debt to be paid. All possible reasons for his visit. 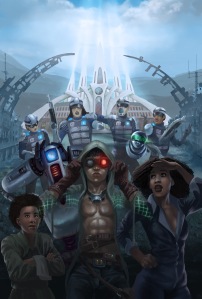 What is the most fascinating thing about your main character?

Avinon is only 16, but because of his unique circumstance and situation he is more informed about the state of the world than most. A calculated risk taker, he has an urge to break himself of his lone wolf ways and bring light to the hidden history of the world.

If I were stuck in a room with your main character, what would we be doing?

Not a fan of being locked in a room at all Avinon would be finding a way out and encouraging you to so the same. People are not to be trusted and not having an escape is a bad place to be in this world.

You have unlimited money to buy a gift for your main character. What would you buy?

I would buy Avinon a Moon Jumper, a small PC vessel that would get him off planet.

Everyone has at least one specific challenge that holds them back. What is that challenge in your work and how do you overcome it?

I would say that the biggest challenge for me as a writer is getting the first two thousand words out. They seem to be the ones I wrestle with.

You have a chance to hang out with any literary character for one day. Who would it be and what would you do?

If I could hang with any one character it would be Falcor from the Never Ending Story. We would ride around the world chasing bullies!

I would love to write a Teenage Ninja Turtle story, I have even written some notes for a fan fiction, but never got around to it. I love what they have done with the Vol. 5 comic and as a product of the 80’s I grew up on the turtles. I also have a herd of pet ornate box turtles and that is a big commitment to turtles.

My work place is the living room floor or couch. My wife and a pair of beagles my coworkers . Most of the time I have music playing, anything from Murder By Death, to classical, to Portuguese Fado music. Or I’ll just throw in a sci fi movie of some sort. Once settled in I go till I can’t, or have other obligations.