Paul Lavender was born in Gateshead in the north-east of England in 1968. He now lives in Worcester in the West Midlands. He is still a supporter of Gateshead F.C though!

He is married and has a son.

In his working life, he has been an Electrician and a Manager for a logistics company but is currently a stay at home dad.

The Eighth God is his first novel; the second will be called The Sect of Seven, and the third will be Helekose.

1.Without giving any spoilers, what is your favorite thing about this book?

The people who have read it and taken the time to review it have all found different people to enjoy in the book. 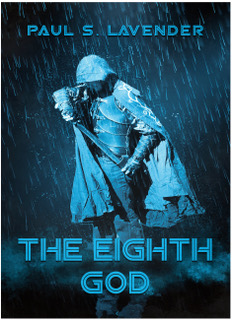 2.What character from your book fills you with hope?

That would be Melress. He is a half-elven battle mage and always tries to see the best in people.

3.Your main character walks into a bar. What happens?

The Eighth God doesn’t really have a main character as it has several POV’s, but I would have to say Saethryth walked into a bar and tried to have a quiet drink. A half dozen people tried to remove him from his ruby encrusted armour. Blood and body parts go flying and then Saethryth leaves.

4.If you could change any one thing about your work, what would it be?

My world building. Although to be fair there are only about half a dozen locations in The Eighth God. The sequel The Sect of Seven covers a wider area and improves on the world.

5.Everyone has at least one specific challenge that holds them back. What is that challenge in your work and how do you overcome it?

I have a child with Asperger’s Syndrome and last year this was causing me to collect him from school after 15 minutes or so. Little writing was done on those days as I had to home school him. Things are a lot better now and he has been going to a different school, so I’m hoping the muse will flow again!

6.How did you find the time to write this book with your busy life? What ideas do you have on how others can make time in their lives?

A lot of The Eighth God was written using Word on my iPhone when my wife and son were asleep! Which is pretty much my advice – write when you can! It doesn’t matter if you don’t like it as it can be edited when you are more awake/alert.

Technically I have two! I have an iMac in the corner of the hallway which I use for e-mails and the odd bit of writing. Then there is the family PC in the lounge which as it has Scrivener on it gets used more at the moment. Both areas are untidy though!

8.What piece of art, that is not writing, moves you?

I do like art even though I can’t draw for toffee!

9.If we wanted a good story—book, show or movie—one that you didn’t write, where would you send us?

There are so many excellent authors coming through at the moment, so that’s a difficult one. I would have to say Faithless by Graham Austin-King.

10.What’s the most beautiful thing you’ve ever seen?

My son being born.

That would have to be Frank Castle A.K.A The Punisher!

I would love to live in Cumbria (more specifically, the lake district). Lakes, mountains and a bit of peace and quiet (out of season) to write. If it was good enough for Wordsworth and Beatrix Potter I’m sure it would be good enough for me.

That would have to J.R.R Tolkien because of his amazing world building and the fact we share a birthday.

For more from Paul Lavender: