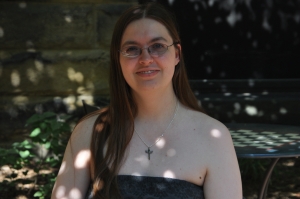 Alexa Grave loves to tell stories – it just so happens her characters occasionally take her on an unexpected ride. Most of what she writes is dark fantasy, but she enjoys her attempts at the humorous side of things. It’s not odd to find romance in her fantasy as well.

Alexa’s life isn’t filled with writing alone. In her spare time, she enjoys gaming. And she has a supportive husband just as addicted to gaming as she is. Reading and thinking up large, impossible projects to work on also top her list of fun things to do.

Most importantly, she has two beautiful daughters who don’t give her much spare time to do any of the above.

I’ve always created stories in my head for as long as I can remember. In grade school I’d create elaborate stories when trying to get to sleep at night (a habit that likely contributed to insomnia – heh). The story in Mind Behind the Mind actually began right after I obtained my undergrad degree. I thought it would be a longer short story, and then someone told me it would be a novel. Well, it turns out it will actually be 3 novels once I reach the end. And I worked on the first novel as my thesis for my Masters program.

The best thing about fantasy is the ability to create any world I want to. Though there are always rules within a new world, I get to choose those rules and mold them so they make sense. The possibilities are endless. And I also always like adding in that darker edge that can sometimes skirt the horror line or dark humor. It’s liberating being able to explore the darker side of things. 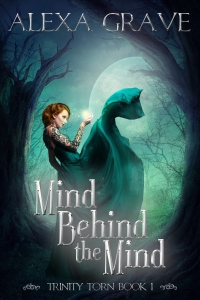 Luminorbs. It’s actually kind of funny how they came about. One of my mentors in my writing program pointed out an anachronism that was associated with electricity. Well, instead of scrubbing the anachronism, I added in the magically created light source of luminorbs. They’ve actually played a part in many things now in Mind Behind the Mind and the upcoming sequel Thorns Entwine the Blade.

4.What character from your book fills you with hope?

I’d say Corinne fills me with the most hope. She’s like a second mother to my female protagonist, Tessa. And though she has a lot of darkness in her past, she’s still willing to look inside others and search for the good in them.

5.Your main character walks into a bar. What happens?

Well now, that’s already clear in Chapter 3 of Mind Behind the Mind. Tessa walks into the inn, which is of course also a bar, and finds herself face-to-face with the witch hunter Bastian. Though she’s a witch, she doesn’t run. Nope. She finds herself undeniably drawn to him.

6.When you are writing, tell me about the emotions that are running through you and what it takes to work alongside them.

Is it bad to say that I feel like my gamut of emotions while I write can be a bit schizophrenic? I can be all over the place. There’s the simple joy of writing, then the doubt that the story is any good, the fear that I won’t get things just right, the pride when I write a sentence that I love. Honestly, sometimes it’s hard to focus. I constantly have to remind myself when working on a first draft that I just need to write. Get it on the page, don’t worry about any issues right now, don’t get caught up in writer hubris — just do it. I have to make myself write the next word, then the next, and so on, until I reach the end. Then I can deal with a whole new bag of emotions when I get critiques and dive back into revisions. It’s a never-ending rollercoaster!

7.Everyone has at least one specific challenge that holds them back. What is that challenge in your work and how do you overcome it?

Description is my biggest weakness in my own work. I’ve never been a fan of long, drawn out description, even as a reader, so then when I’m drafting I almost always end up with too little. Usually it’s the one thing I ask any of my fellow writer friends who I swap critiques with to point out where they feel I need more description. And then when I revise I make sure I keep it at the forefront of my thoughts and flesh things out. Revising is a necessity for me, and I always see my writing rise to a new level during the process.

8.You’re going to go back and visit yourself when you first started writing, at whatever age it was, and you can give yourself one piece of advice. What would it be?

Just write. Keep writing. Time flies by and before you know it you’ll have a pile of ideas and not enough time to tackle them all. So, write like the wind and get all of those stories on the page.

9.Let’s talk about tools. Do you have a word processor that you would tell us to use? Is there a certain computer that has become your favorite? What do you look for in a keyboard? What would you absolutely have to have if you were to sit down and write your next book?

There are many things I like to use. Scrivener is nice — it helps me organize my thoughts with how I can break up the scenes and chapters and hop from one to another in a separate pane if I need to remember something I wrote earlier. I also prefer to write on my desktop (a computer I built about a year ago). However, Word will do and so will handwriting, if I need to (I used to handwrite everything first, but I felt bad about wasting all that paper and time). And if needed, I’ll use my laptop to hide from the kids or when I’m away from home. But the one things I insist on and makes the words flow more freely for me is music. Music evokes emotions in me, and I have certain songs I’ll listen to depending on what I’m writing. As long as I have my music, I can ease back into whatever world I’m building with computer or pencil.

Messy. No matter how much I try to organize, it seems that I’m in a constant fight with entropy and dust. It doesn’t help that I’d much rather write (or play video games) instead of cleaning.

Sneaky. I’m a seat of the pants writer for the most part, but I do map out a scene I’m about to write in my head before I sit down to do it or I at least know the general plan of a story or novel. However, it never seems to turn out as planned. That muse of mine, she has other ideas and surprises. She makes everything more interesting. Also, she loves to tempt me with shinies (my term for new ideas). It’s inevitable that she’ll plop a new shiny in my lap when I need to finish the project I’m currently working on.

New Orleans. I’ve traveled there 4 times already, even though there are many other places I haven’t visited. Though if I lived there I’d probably be in a food coma the whole time which would get in the way of writing. 😉

Well, since you mentioned DC, I’d probably choose Harley Quinn. She’s so crazy. Writing crazy is so much fun.

For more from Alexa Grave: