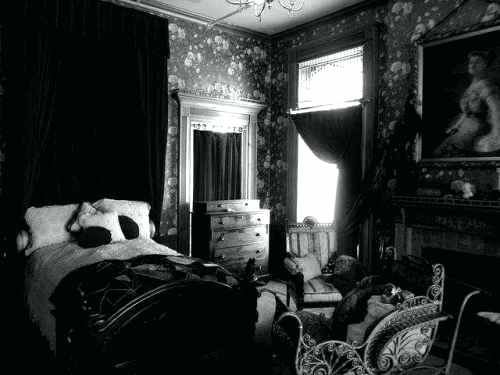 That day in group I read my vampire story. He was a power creature. A beautiful creature. Mysterious and dark. He was a tragic beast who hurt those around him and brought despair, and I knew him miserable. So I killed him. In the story, this powerful vampire climbs to the roof of the building he lives in and watches the sunrise.

He wants to die.

Gypsy lost her mind when I was done reading my story. She jumped from her chair and pointed in my face.

“That is stupid! That story is terrible. That is not how vampires think. They don’t want to die. They are beautiful and mysterious and they want to live and will do anything to do so. They are happy with their lot and they would never commit suicide. You’re an idiot. You’re not what everyone thinks you are, Jesse. You’re nothing.” She stormed out of Writers Club and the room went silent. I looked at Walleye, then to Harvard.

“Someone wants to be a vampire a little bit too much,” Jammy said.

But Cry was friends with Gypsy and she was loyal to the bone. She gathered her things and left, running to catch Gypsy. “Sorry, Jesse. She is a bit emotional right now.”

Brett raised his hand. And I heard a groan from Mrs. Bronte. We all hated what came out of Brett. He was fighting to be cool. Obsessed with being different. He fought hard to be artistic and wanted to write one brilliant thing. One thing to be remembered for.

What he read was stream of conscious. It was gibberish, one thing after the next, with no semblance of order or worth. The piece he read with an air of desperation, and when he was done and breathless, he looked up at me and braced himself, gasping.

“I like it,” I said. I usually said something encouraging, fought for something nice to say, but this time I hadn’t needed to struggle. It was actually pretty good. We talked about it and even Mrs. Bronte said nice things, and Brett exploded into a ball of joy. He shut his mouth after that. He knew he had pulled off a miracle and he didn’t want to fuck it up. We didn’t hear a thing out of him for the rest of the day.

After group, we walked to Jammy’s house.

She lived across the street and down the road from the school. Her mother was older and going deaf, and she watched TV with closed captioning running. It was mesmerizing to sit there and read and hear the TV at the same time. I would sit for hours, ignoring everyone who tried to talk to me as I watched the words go by and fought to compare them to the words being said.

They pulled me past the TV this time without letting me sit, and they took me back to Jammy’s room.

That day we holed up in her room, pulling the curtains and shutting the door. We stayed mostly quiet, just a group of kids waiting for something. Chanel sat the bed by the wall. Walleye had shoved himself back in a corner between the bed and a book case. Harvard sat next to a table trying to hide under it, and I don’t have any idea where I was.

I can see the whole thing perfectly, but when I try to see myself, I get lost. The room swallows me. I was not there. I was above it all, watching as my people settled into a melancholy that would bruise us all that night.

Live, we listened to Live, both albums. When we got to the song Tower of Davidson, I heard a mumbling in the back of my head. It stayed for a long time. At times today I will hear that song and my head will begin to buzz.

When we had set the sun and the room fell dark, when we were listening to Marilyn Manson and the Dope Show, Walleye said loud enough for everyone to hear, “Jesse, tell us a story.”

“Yes,” Chanel said. “Tell us a story. You can do it. We know you can. Make something up if you have to, just bring us out of this.”

That was when I noticed we were all lost. We had all slipped into ourselves, found a place in our minds where hid a darkness that was going to devour us.

“I miss her,” Harvard said.

Room went silent. “We miss our pain because we know nothing else. We call out for agony because it never leaves us. Not all of us have this burden.”

“Everyone here,” Katty said. I hadn’t realized she was there.

“But not all of the world. They see things differently. But we here are all lost. We here have no hope.” I thought of my life, my mother and my sister. I thought of the horrors that pressed in from somewhere that had no name. And I could not stop myself from talking about it.

“He watches everything I do and I feel a blade in his hands,” I said. “It is growling back there, gnawing on something raw, and I can feel its breath on my neck. He is cowering and crying and wishing for anything strong to save him, but I can’t reach him, and I don’t know his name.

“There are more. I can feel them in me and they are watching. I am never alone, and I think some of them want to hurt me,” I said.

The music went off and someone stirred to start it again, but Harvard held them back.

I was crying now and I felt the room breathing around me. I felt them all there, out there in the dark of the room, listening and waiting.

“Who?” Chanel asked after a long pause.

“What is coming for you, brother?” Harvard asked.

I fought for words. But I had none. I fought for a vision to summon. Fought for an image that I would be able to describe. I burst into tears and I heard Jammy get up. She dropped on the floor and crawled on all fours. She stopped when she reached me, and grabbed the toes of my shoe. She didn’t want to hug. Didn’t want to intrude. She just wanted to touch, to let me know I wasn’t alone. She tapped my foot and I sobbed.

“I’m not killing you,” Jammy said. She had had a friend commit suicide before. Her great fear was another friend dropping off on her.

“If what finds you?” Walleye asked.

“If the demon finds me. He wants to tell me a secret. If he finds me, I will be too weak. You have to kill me before he whispers to me.”

“I’ll kill you, Jesse. You give the word and I’ll send you off like a warrior,” Harvard said.