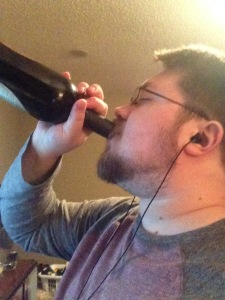 According to family lore, Aaron learned how to read (or knew, actually) at the ripe age of two years old and proceeded to devour – figuratively, of course – every book he could get his hands on like a literary toddler-aged Galactus. He continued to read and expanded his reach to writing when he was in middle school, creating a piece of work that makes him physically upset any time he reads it. Thankfully, he grew out of it and now writes reasonable-quality work that seeks to entertain, with his first book, Robocopter Ski Patrol, blending Doctor Who-style time manipulation with Archer-style humor and moderate to severe vulgarity at times.

1.Everyone has at least one specific challenge that holds them back. What is that challenge in your work and how do you overcome it?

For me, it’s when that ‘first push’ energy dissipates and I’m around 30, 35 pages in and I just don’t know where I’m going. I don’t necessarily give up, but my output slows down and I get bored and go try different projects. As time has gone on and I’ve added a significant number of other things I can work on to my TBD list, it makes it even tougher. Once I figure out how to get past it, I’ll let you know.

2.You’re going to go back and visit yourself when you first started writing, at whatever age it was, and you can give yourself one piece of advice. What would it be?

Just do it. It’s going to be terrible (and yeah, it really, really is) but it’s a start. Eventually, you will write something that isn’t hot baked garbage. Just don’t show it to anyone, since it’s basically a literary version of jamming red-hot pokers in someone’s eyes. 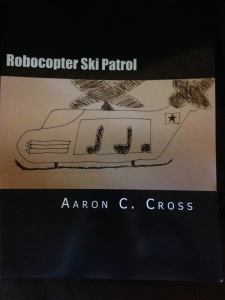 I really love how, in Robocopter, I just went for it and made things as weird and funny as I wanted. I played around with story structure and had odd little side tangents and messed with fonts and font size. It was utterly unique and I don’t know how it worked so well for me.

4.If you could live anywhere other than where you are, where would it be?

I’ve thought a lot about this. There is a little hotel in Sorrento, Italy (I can’t for the life of me remember the name right now) and it has rooms that can be located under the pool and facing out onto the Bay of Naples. I would rent/buy that room, sit there, drink scotch, and write – that’s the dream, absolutely.

5.You have a chance to hang out with any literary character for one day. Who would it be and what would you do?

Hmm. One of two characters, I think. First, let’s go with Helen of Troy, because if I’m going to shoot my shot, I’m going to go big and, worst-case, Odysseus kills me and I get mentioned alongside all those other mythological monsters. Win-win. The other character would be Holden Caulfield, and I would just slap him over and over for the duration of our time while yelling at him to ‘grow up’. Probably wouldn’t listen, but that catharsis, you know?

6.If we reach beyond the written word into visual media, and you could choose how your story is consumed, would you want a television show, a movie series, or anime to tell the story of the book and the world it takes place in?

I would adore a movie series. That would be so much fun to see. I would have gone with TV too, but I think that a movie would better capture the crazy, the drinking, the sex, and the reality-weird that the books have.

7.If you are casting your protagonist in a movie, what actor would you choose and why?

This is a tough one. The actor would need to be good-looking, but not stunning. He’d need to have the right level of neuroticism mixed with snark and the ability to play the straight man completely when needed, along with being able to actually be competent at times. Actually, I think Paul Rudd would be a good fit, the more I think about it.

8.Do you have any regrets about the story you told? Would you make any changes to its telling or did you capture exactly what you were looking for?

Honestly, I don’t. The story did what it was meant to do, which was be utterly weird and self-contained. The only thing I might change would be to add in some foreshadowing for later, since it does serve as the first book of the series. That being said, it wouldn’t be necessary, since later books do introduce things that reference the first book. Still, it’d be nice to have that connectivity.

9.What are the things you’re most proud of in this book or series?

I really like the dialogue for the entire series. There is this back-and-forth style of rapid-fire snark that makes me giggle writing it. I love them having the ability to just play around with words to say exactly what they want. Also, in the third book, I have a semi-immortal Russian named Grigor and he is my favorite character ever.

10.What element of this story can we expect in your future work?

By and large, I’m going to write comedy. You’re going to be able to laugh at what I write. Every so often, there may be stories or books that are serious, but those are not my strength. I want my readers to be able to sit back and just enjoy themselves. They may feel feelings, but that’s not the main goal.

11.You are forced to pick a fist fight with one of the characters in your book. Who would you choose and why?

I…don’t really want to fight any of them. They’re all combat-trained and mentally unstable. If I had to pick, though, probably Dooblecraft XVIII. He’s basically a complete and total wimp, so I could beat him but good.

Well, my co-conspirator would probably be either Miss Girl from Ipanema or the Viscountess. They’re basically the only two actually competent characters in the book. I’d probably go with the latter, because she’s less morally upright, and what couldn’t I do with her? I mean, she already rigged an election. Whatever crime it would be would likely be some kind of espionage designed to put some people in power (probably the two of us). I’d be down for that.

I like scotch. I like being funny. I don’t so much like not being particularly skilled with flirting, but my characters tend to pick that up over time, so that’s kind of aspirational. I said scotch, right?

For more from Aaron Cross online: