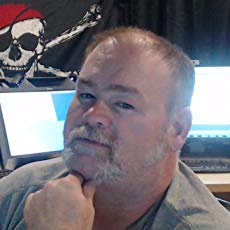 Matthew P. Gilbert, in addition to being a fiction author, is a professional video game developer; a veteran; a columnist for his local newspaper; and the father of three wild boys and two wild girls. He was born and raised in Woodbury, GA, and has been on watch for zombies ever since. He is the author of the Sins of the Fathers series.

There wasn’t really a point where I made a decision. It was just something that was always there. I had characters in my head who wanted to live, and I was the only one who could bring them to life. It’s more of a ‘they chose me’ kind of thing.

If you consider scifi to be ‘what if’ of technology, fantasy feels to me like ‘what if’ of sociology or history. What if a culture existed with these values? What if different choices had been made in the lead up to a war?

The people and cultures, and the drama their interaction creates.

4.Everyone has at least one specific challenge that holds them back. What is that challenge in your work and how do you overcome it?

Finding the time. I have a day job that is pretty demanding, as well as five children. Things take me much longer to finish.

5.Let’s talk about tools. Do you have a word processor that you would tell us to use? Is there a certain computer that has become your favorite? What do you look for in a keyboard? What would you absolutely have to have if you were to sit down and write your next book?

My day job is game programmer, so I have worked with a lot of different systems, including console dev, so adaptability is a virtue for me. My typical situation is working from any old PC. I am not picky about keyboards save that I want the keys in a standard layout, not some of this novel crap they have begun to use in some models. I used to use open office, but switched to Word so I could more easily work with editors. I don’t have many ‘musts’ at all. I adapt to the tools I have available.

I work from home, both for my day job and my writing. My office consists of three desks, five computers, a couple of miles of network cable, and a chair that rolls back and forth between desks. The floor is worn from the casters, and will likely need replacing before long. It’s a very busy place.

Impossible. I have no kind fairy who gifts me with inspiration. I have to work for mine, and my work is the result of tenacity, spite, and caffeine.

8.What element of this story can we expect in your future work?

I have about six more books planned in this series. I also have some shorts and novellas set in the same world. If you read carefully, you’ll see references back and forth.

9.You are forced to pick a fist fight with one of the characters in your book. Who would you choose and why?

Kariana. She deserves a beating, and I could probably take her. I’d bank on the fact that I could jump her when she was hella drunk or drugged, and she would either forget I kicked her ass, or I could convince her it was actually some S&M stuff she misremembered as a fight.

This is an easy answer: Rithard. He knows just how to plan the crime so that we would get away with it. As for the specific crime, I think something like embezzlement, which has low risk of getting killed in the execution.

11.Now that you have published your first book, do you have any dreams you have not reached? Goals for new books, series beyond this publication, or anything else that can tantalize the fantasy public?

Absolutely. As I mentioned, there are a lot more books planned for the series, both future and past. This is a very big tale that spans generations.

12.You have a chance to hang out with any literary character for one day. Who would it be and what would you do?

I would hang out with Randall Flagg and tell him the thinking cap won’t work on Mordred. Flagg deserved to be the final villain in the Dark Tower, and I found his death to be disappointing and anticlimactic. I would much have preferred to see Flagg get the better of Mordred, only to end up on his knees at the Tower.