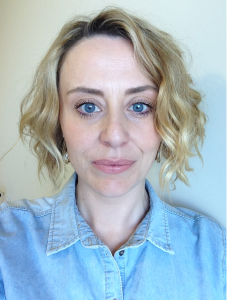 Rosalyn Kelly grew up in the magical New Forest ​in the south of England and has lived around the country ​as well as in the Middle East, and travelled all over the world. She studied English Literature and Language at Oxford Brookes University before embarking on a PR and marketing career.

After ten years telling the stories of international brands and businesses, she decided the time had come to tell her own and her debut novel MELOKAI was published in 2017. Her second novel VIOLYA was published in 2019. The inspiration for her epic fantasy trilogy came when she was trekking in the mountains of Nepal’s stunning Annapurna Sanctuary.

When she’s not putting her heart and soul into Book Three of the In The Heart of The Mountains trilogy, she daydreams about where to travel to next, paints with acrylic, reads voraciously and writes book reviews on the blog.

1.What is it about your genre that speaks to you?

I love the fantasy genre because it’s so imaginative! Sometimes you just don’t want to stay bogged down in reality and need some completely made-up world to escape into, with weird customs, creatures, magic and cultures, high stakes and impossible scenarios.

It allows authors to let their imagination run wild, and I enjoy creating new worlds and inventing the races that live in them.

I read all kinds of fantasy, but the subgenre of fantasy that I write is darker, grittier and edgier than more lighthearted stuff. It’s less black and white – like real life. There are flawed characters, swearing, sex and violence – and the good guys aren’t always destined to win. It’s fantasy but with a hint of realism. 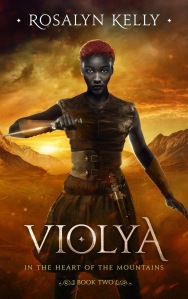 My favorite thing in Violya (In the Heart of the Mountains #2) is the evolution of the main character, Violya.

She’s a shy warrior who is quietly exceptional at her job. But she’s also special and is forced into a situation where she has to overcome her self-doubt and take charge. Writing about her rising to this challenge, overcoming the various obstacles thrown in her way and, by the end of the novel, blooming, was a sheer delight.

Violya is a warrior, so she’d start by running through the daylight dances – a sequence of moves to limber up, stretch and focus the mind (similar to yoga). Then she’d put you through your paces with some combat training – with swords, if you’ve brought yours along, or maybe daggers – and then some fists… Next, you’ll work on some magic practice, honing your skills. After, you’d get comfy sitting on the floor and meditate for a while.

Following all that physical and mental exertion, you’d eat some food – spicy lentil and chicken stew with crispbreads, pickles and chutney, followed by baked apple and honey – and while happily digesting, you’d have a whine and wine sesh.

This is where you get to sprawl in whatever way you please, bitch about your work, tell each other the latest gossip and news and generally make each other feel awesome.

4.Everyone has at least one specific challenge that holds them back. What is that challenge in your work and how do you overcome it?

Self-doubt is a huge challenge for me. Although I try not to be, I’m a sensitive soul and am crushed when I get a bad review.

I pick myself up with lots of positive self-talk, shake off the gremlins and keep going. I remind myself that I don’t love every book I read, so neither will other people – it’s inevitable that not everyone will enjoy what I write.

I like to think of my muse as a special kind of fluid entity that sits between me and all the ideas floating around in the universe. When it notices an idea that would be just perfect for me, it grabs it out of the universe and puts it in my head.

As this moment, when an idea sparks to life in my mind, I get an extreme buzz and an excited vibration in my chest and I imagine the being is happy and content because they’ve found the right idea for the right person to bring it to life.

I’d live in the mountains. I’m a bit obsessed with mountains, I’ve climbed and trekked quite a few. My trilogy is called In the Heart of the Mountains, after all.

I love the magnificence of a snowy peak jutting into a bright blue sky, the sheer scale and vastness of the landscape, the slow-moving yet epic glaciers, the glittering mountain lakes, and rivers that thunder over boulders on their way down.

I also enjoy the fact that there’s a challenge to traverse a mountain, and also a hint of danger – there could be a blizzard, you could fall or the altitude could get you.

7.If you could choose any other writer, living or dead, to be your mentor, whom would you choose and why?

Margaret Atwood. I read The Handmaid’s Tale years ago and absolutely loved it. I’ve read a few of her books since and The Blind Assassin is one of my all-time favorites.

I recently completed her online course on Masterclass and she is very inspiring, funny and fascinating. I’d pick her brains about reading, writing, world issues, interesting projects. I know I’d never grow tired of learning from her.

8.If you are casting your protagonist in a movie, what actor would you choose and why?

Violya is a kickass warrior with a heart. She’s fierce yet loving, fair but not afraid to fight, cares for her people and can also be selfish when necessary. She’s a complex character and I think Lupita would be perfect to portray her.

9.What are the things you’re most proud of in this book or series?

I’m proud of the worldbuilding in this trilogy. I spent a long time before I wrote anything researching, planning and imagining the world, all the cultures and creatures and the history. It was important to me that the world was believable and tangible, and that each character was an understandable product of their world.

I created my own creatures and beings, rather than use classic creatures like elves or orcs. I wanted to create something really unique with the world and who lived in it.

Many reviews note the worldbuilding as excellent, so I’m thrilled that all my hard work to create it paid off and that readers find it entertaining and interesting.

10.What element of this story can we expect in your future work?

The world. I’m currently plotting my third book in the In the Heart of the Mountains trilogy and will start writing it in early 2020.

I have another trilogy planned that is set one thousand years before, in the time when men ruled – Melokai and Violya are set in a matriarchal country.

11.You are forced to pick a fist fight with one of the characters in your book. Who would you choose and why?

I’d knock out the Crown Prince of Drome, Ammad. He’s a little shit – spoilt, egotistical, greedy, power-hungry, manipulative. He has absolutely no care for anyone or anything other than himself and his own gain.

He’s the worst possible person to rule a country and he needs a smack in the face to bring him down a peg or two – although it would probably have little effect.

For any kind of shady business, I’d choose Ammad’s mother, Jakira, and the false Queen Charlotte.

Neither women know of each other in my book, but both are scheming, super smart and highly strategic. They know how to play the long game and to get others on their side. Both think of all the finer details and lay out solid plans that succeed. Jakira has been machinating since she was fourteen, so she’d be the leader.

We’d go back in time, kidnap the Game of Throne TV series writers and install our own writers in their place to change the ending of the Game of Thrones TV series. We’d make it so that Daenerys succeeds and ushers in a matriarchal rule…

Violya is terrified of public speaking. She avoids it at all costs, and when forced speaks awkwardly and gets it over with as soon as possible. Although I will speak in public, and have done plenty of times, it still gives me the jitters.

In so many fantasy books, a character who has never spoken in public before suddenly becomes the greatest orator when the need arises giving awe-inspiring performances with zero nerves and no faltering. I thought I’d switch it up a bit by making Violya nervous about giving speeches.