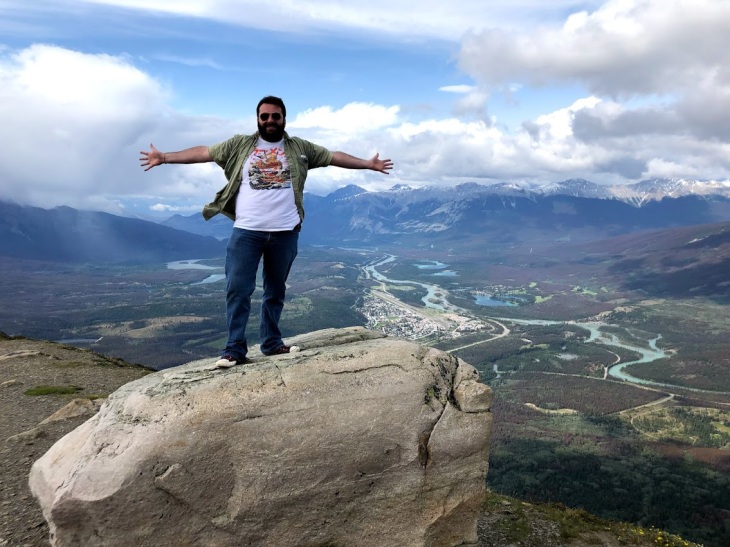 Sean E. Britten is an author and radio presenter from Sydney, Australia. His latest novel, Kill Switch: Final Season, is the third and final entry into the outlandish Kill Switch trilogy revolving around America’s favourite bloodsport of the not-too-distant future. Sean is also the host of the American news and politics-centric podcast ‘U.S. of Ed’.

1.What is it about your genre that speaks to you?

Dystopian science fiction, right now it feels like we’re living in it. So much of everything seems to be happening so fast, it’s hard to keep up. You can tell a story that feels very real to people’s lives but it’s exaggerated, whether you want to exaggerate for the sake of horror or comedy or just for what the story requires. And people can’t complain about you getting your facts wrong about these issues because, hey, it’s the future.

For the third book in the trilogy, the characters grounded it a bit more for me this time. In the first book, its all about the action, the second was an escalation but there’s more story to it. Kill Switch: Final Season, things go completely off the rails but the characters and their arcs, their motivations, kept it cohesive for me.

Talking. Or he would be talking and talking, mostly about himself, for as long as you’ll listen. The challenge I set for myself in the third Kill Switch is the main character’s partner is mute so to keep up the energy I really needed a protagonist who loved the sound of his own voice, and Digger Dundee certainly does.

4.Let’s talk about tools. Do you have a word processor that you would tell us to use? Is there a certain computer that has become your favorite? What do you look for in a keyboard? What would you absolutely have to have if you were to sit down and write your next book?

Pen and paper! Crazy as it might sound to some people, I write everything down physically in first draft and refine the story after I type it. I like to feel that connection to the writing, it cuts down on distractions, and it means there’s only one direction the story can go, forwards. I can’t go back and edit, and tweak and tweak, until the story is done, so it keeps up the momentum for me. Google Docs are also terrific, constantly saving, keeps tracks of edits and you can work on the story wherever you have an internet connection.

Cluttered, thankfully we don’t use the dining room table a great deal because I mostly work off it these days. Piles of notebooks around my laptop, and Lego, because I’m a sucker for building sets or keeping minifigs around my workspace. I’ve got an artist easel set up so I can prop the notebooks up when I’m typing from them and a gris-gris bag, a Voodoo talisman, for increased creativity dangling off that because I figure it can’t hurt.

Previously I’ve said New York or other big cities to this question, but right now, the way things are, the way media and news and politics gets thrown at you every day it’s just exhausting. I’d love to be able to go far, far away, to a little tropical island somewhere that’s not been quite swallowed by rising sea levels just yet, with a lot of peace and quiet and nothing much else, take a deep, deep breath and get some more work done.

7.If we reach beyond the written word into visual media, and you could choose how your story is consumed, would you want a television show, a movie series, or anime to tell the story of the book and the world it takes place in?

I’m a very visual writer so absolutely I would love to see the story and the world of Kill Switch depicted on screen. I’m tempted to simply say movie but personally I always thought of the characters and world animated in a Jamie Hewlett Tank Girl / Gorillaz sort of style, ever since book one.

8.Can we expect an audio book from you, and if you had the ability to choose anyone to narrate it, is there someone in particular you would hire?

I would actually very happily record it myself, I work in radio and with audio constantly as well as hosting a podcast called US of Ed and have access to professional studios. Although I enjoy fiction podcasts, I’ve never made the leap to audio books as I really enjoy the physical act of reading. I’ve just never found the time to make that leap, although I think with the audio book sector blowing up it’s only a matter of time – watch this space, I guess?

9.What element of this story can we expect in your future work?

Although the Kill Switch trilogy is complete I would very much like to do some more works in the larger setting, outside the arena of the games. You only get brief glimpses of it but it’s a pretty wild science fiction / cyberpunk setting and some of those glimpses actually have much larger stories in mind.

10.You are forced to pick a fist fight with one of the characters in your book. Who would you choose and why?

This would be a very, very bad idea given the book is filled to the brim with mercenaries, mutants, criminals, one six-fisted cyborg and a literal Nazi superman. There’s a returning character from Kill Switch: Serial Escalation that makes an appearance, I’ll pick her not because I could win but because it’d at least be over fast.

Now here I’m spoiled for choice because as I say, there are a lot of dodgy individuals to choose from. Let’s go into the big leagues and say political assassination, Death From Nowhere Jefferson is a sniper who doesn’t understand why Russia needs both a president and a prime minister and I’m kind of on her side with it.

12.Do you have a celebration that you embark on when you finish a book, be it a release party, a trophy, or even a shot of whiskey?

I wish I did. At the moment the best I can do is write (DONE) beside the final few pages of writing or editing when a draft is completed in my daily record. Do have all the paperbacks lined up on a shelf in my living room though, and those are kind of trophies.

I, too, love the sound of my own voice which is why I work in radio when I’m not writing. I didn’t feel I had a great deal in common with Digger when writing Kill Switch: Final Season but it was a very conscious decision to make him Australian so his walls of dialogue would flow easier.

1 S. of Ed on Apple Podcasts