R.T. Cole is a fiction writer and the author of the epic fantasy series, THE REALM OF AREON. He started writing at the age of 10, penning 14 short stories about “The Transformers”, based on the hit cartoon series of the 1980s. Years later, in 2001, after being amazed by “The Fellowship of the Ring” in theaters, his love of the fantasy genre was born – followed quickly by the inception of his first major idea for an epic novel series.

With two books of THE REALM OF AREON published, he is currently working on the third entry in the series: SHARDS OF THE SUN.

R.T. Cole lives in Northern New Jersey with his wife and son.

Ever since I was old enough to recite an entire movie – “Ghostbusters” would be my prime example in this case – I’ve enjoyed stories. Whether they were in the form of a movie, tv show, or book, if it was a good story, it was exciting to experience it. Just to make this a very short story, I eventually saw “The Fellowship of the Ring” in theaters when I was 17 years old. I was completely blown away. I immediately came up with an idea for a novel series, and though I’d constantly jot down notes here and there, it’d take me until 2017 to start writing the actual manuscript for GENESIS OF WAR.

Something about the fantasy genre just sits right with me. I enjoy many different genres throughout different mediums, but while I’m writing, I enjoy the thrill of world building, creating characters (names, characteristics, etc.), and playing in a world where magic exists.

3.Everyone has at least one specific challenge that holds them back. What is that challenge in your work and how do you overcome it?

Time-management. It’s tough for me to find the time to really sit down and write. That’s mostly because of my own methods, as I need to prep before I can write – and by “prep” I mean I need to make sure all the necessary files are open and accounted for, my backup devices are secure for saving purposes, my phone is on silent, etc. The way that I overcome my issue with time is by writing what I can whenever I’m able. Even if I have to dictate some notes to my phone, or write for 5-minute sprints every day, I always tell myself to get something done for the day.

4.You’re going to go back and visit yourself when you first started writing, at whatever age it was, and you can give yourself one piece of advice. What would it be?

If I went back and visited myself when I started writing my first book, then I’d tell my 17-year-old self, “You’re about to spend more than a decade writing notes… Just get the basics down, stop procrastinating, and start writing Chapter 1 already!”

The home office is just starting to take shape, so let me get back to you on that. But before then, my workplace has been wherever I can sit comfortably with my laptop. Oh, and I always need to make sure I have some coffee in my oversized mug.

In the middle of nowhere, a cabin in the woods, and next-to no internet service. I just want to sit and write good books, and I want a secluded space to do that.

7.Now that you have published your first book, do you have any dreams you have not reached? Goals for new books, series beyond this publication, or anything else that can tantalize the fantasy public?

My original plan was to close the gap between each book in my first series. In other words, my first book was published in March 2018, and then my second was published in February 2019. I wanted to release books within a year of each other, and I accomplished that with the first two… Unfortunately, due to the complications of our worldwide pandemic, I could not reach that goal for Book 3. On the other hand, I do still plan on releasing SHARDS OF THE SUN this year, though I don’t have a firm date in place just yet. 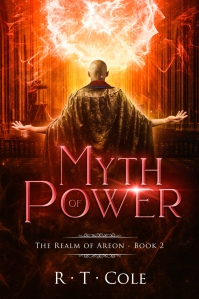 As for a series beyond THE REALM OF AREON… I have some things in the pipeline. One is a new sci-fi series. One is a standalone horror anthology. And one is a return to the fantasy genre, but that’s all I can say.

8.If we reach beyond the written word into visual media, and you could choose how your story is consumed, would you want a television show, a movie series, or anime to tell the story of the book and the world it takes place in?

This is one of the toughest questions I’ve ever come across… Many years ago, I would’ve said movie series without hesitation. But with the success of “Game of Thrones”, I feel that a tv series would certainly help bring THE REALM OF AREON to life. Plus, I’d hope that the tv series would have a better chance at keeping almost every aspect of the book in it.

9.If you are casting your protagonist in a movie, what actor would you choose and why?

You know, I’ve done some research on this topic before. This will probably come as a unique choice, but I’d go with Garrett Hedlund. He’d play Rudi Palidor. I first saw Hedlund in the movie “Troy” in 2004, where he played Patroclus. I always felt like the character’s eagerness to prove himself in that film was a direct comparison to Rudi, but from a younger perspective. I’ve seen Hedlund in other films as well, and he just keeps impressing me. If my series ever gets optioned for film, I’d ask for Garrett Hedlund in the lead role.

10.Can we expect an audio book from you, and if you had the ability to choose anyone to narrate it, is there someone in particular you would hire?

I do not currently have any audiobooks available, but it is definitely in the plans. It’s tough to ignore the reach of audio, that’s for sure.

If I had a choice of narrator, I’d go with Liam Neeson. I think the man’s voice speaks for itself.

11.What are the things you’re most proud of in this book or series?

The fact that I’ve written them. (Laughs) No, but really, I’m just proud of how the characters are progressing. Sometimes, when I’m outlining a novel, a character may act a certain way or have a specific bit of dialogue, but when I’m in the middle of writing the first draft, those same characters will form a mind of their own. Then, the character grows organically. I’m a huge fan of that aspect of writing.

12.What element of this story can we expect in your future work?

Foreshadowing. I leave lots of breadcrumbs within this story. I’ve actually planted little seeds in the first book, which won’t show up again until the final book in the series. As a fan of fantasy books myself, I thoroughly enjoy it when the author reaches back to something that only those paying close attention would understand.

13.Do you have a celebration that you embark on when you finish a book, be it a release party, a trophy, or even a shot of whiskey?

I do have a shot of whiskey after I finish each book! That’s my go-to celebratory drink. I haven’t had an official release party just yet, but perhaps in the future with another book release.