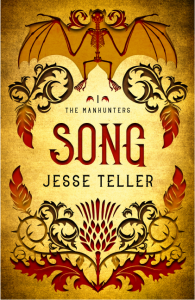 On October 5th my fifth book Song will be released. The cast is led by a wizard named Rayph Ivoryfist. Many and varied are the shades of his personality, and wild and rampant are his powers. He is scary to write for many reasons. How do I challenge a character this powerful? How do I show growth in one this ancient? How do I define a race with a person who largely hides who he is? All these are issues for me, but none of them inspire the kind of apprehension and fear I feel when writing Rayph as much as this simple fact:

I named my son after this character.

Rayph Teller, my first-born son, was named after Rayph Ivoryfist long before I wrote the books that fill this trilogy. When I crafted Ivoryfist, his past, his life and his future, when I brought to life his personality and his flaws, I had to keep in mind that I put a bold target on his back, telling one of the most important people in my life: Here, look at this man. Here is an image of what I was thinking when I named you. Look to him for inspiration, for what I want for you and from you.

Terror is too strong a word for what I felt when I wrote Rayph Ivoryfist. But not by much. I had, for a long time, no idea what to do with this book when I thought of my son and what I was saying about who he is, how I see him, and what I want for his future. How do I approach building this man that will help direct my son’s life?

I started with faults.

One of the greatest things we can teach our children is that no one is perfect. If I show my kids nothing but perfection, and they think that is possible, then when they make mistakes, they will flail themselves. I spoke to this when I wrote a different book by creating a perfect character and then giving him a mistake that nearly destroyed him. That book is coming, but in this one, I wanted to steer clear of that lesson.

I do not think my son has this problem. He is one of the most humble people I know. But I wanted to show him how ugly this aspect is in a person. My Rayph is smart. He is strong. He has many of the attributes of a person who might think himself perfect. As he grows, he will learn this about himself. I am raising him to be a king of men, and with every lesson I teach him, I give him a great amount of power. I needed to curb this aspect of his life as soon as possible without pointing at him and saying, “You are being arrogant.” So why not show him this fault in someone else?

Rayph Ivoryfist underestimates his enemies. He has a tendency to think himself overly powerful and his foes weaker than they are. This gets him in a lot of trouble. It is an aspect of his arrogance, but more specific. He has this tendency with everyone but his friends. His inner circle he deeply respects, but those outside of it, not as much. This is not my son, but it is a trait some people have to their own detriment.

I started with faults, but didn’t stay there long. I needed to craft a role model who could inspire my son to greatness. I started piling things on this character that I wanted for my Rayph.

Utter loyalty to friends and family. This is a defining characteristic of Ivoryfist. There is no favor too large for a friend. There is no danger he would not face for a loved one.

Love of country. I want my son to love his people and his nation, and I instilled that in the character. But at the same time Ivoryfist is the Hope of the Nation, he has a desire to hold its king responsible for his actions. He is involved in the fate of his nation and holds its authority accountable as he fights to protect it.

Ivoryfist has a sense of duty. He does not see a thing that needs done and wait for another to do it. He is the kind of man who sees a need and fills it.

Honor. Love. Respect. Power, real and terrible, and the reserve to know when not to use it. I built all these virtues into my son’s namesake. I did it because writing gives me a voice. It allows me to point and direct people’s attention at the things I believe in.

I am building the Hope of my Nation, the Hope of my Family and the Hope of the Future I envision, for myself and the world at large, every time I speak to my son. This is just another tool to do that with.

But that doesn’t mean it is not a scary thing to do.