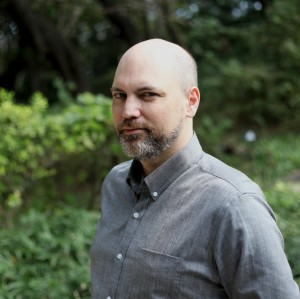 William Ray is one of the independent authors competing in 2018’s SPFBO with his novel The Great Restoration. It’s a fantasy world 19th century detective story, that shares a setting with his debut novel, Gedlund which was named to Kirkus Reviews’ Best Books of 2016.

Originally from North Carolina, he currently lives in Reston, VA with his wife and dogs. He’s worked in television, retail, patent prosecution, and been a trademark lawyer. He’s also a big fan of Transformers, a long-time member of the 501st Legion, and a tabletop RPG gamer of several decades.

Why storytelling? What made you yearn to tell a good story, and how long was this story within you before it came out?

The Great Restoration came to me while editing its predecessor. I started wondering what would happen to the folks from Gedlund after that story ended. It took me a year to go from my developmental edit into a finished book, so lots of little concepts bounced around.

As for why storytelling in general though… I suppose I’ve always had a compulsion for it. With any fiction I always revisit the ideas and the characters and juggle concepts in my mind. Fantastic places, strange occurrences, and interesting people all bounce around in my head regardless, but if I left them there, it would be a rather lonely experience.

I think of it like going on a great vacation. You return from that adventure full to bursting, trying to tell your friends who’ve never been. They may nod and even express polite interest, but even at their most attentive, there’s far more excitement in stumbling across someone else who has been there. You find that fellow wanderer and the pleasure of sharing that excitement doubles. As a storyteller, what I want are fellow travelers to these strange vistas to share in my excitement for them.

The stakes in my tales tend to lack the pompous scope that appeals to Calliope, and the tone would never quite satisfy either Melpomene or Erato. I’ve often admired Euterpe from afar, nodded toward Polyhymnia and flirted with Clio, but it is sacred Melete, daughter of Zeus and muse of contemplative arts that likely lays claim to me, if any do. Blessed Melete can find winding threads of philosophy woven deep, appreciate my subtleties, and take joy in strange lands made real. 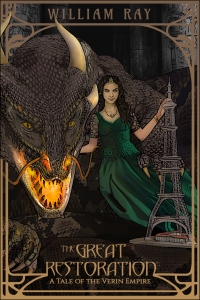 What is it about your genre that speaks to you?

I love visiting strange new places in fiction, and the feel of being there without having to smell everything. Fantasy locales are always full of horrific odors – unwashed peasants, horses (& their leavings), people dying, decaying things, just to name the more terrestrial ones. Fantasy lets us visit those strange locales, and usually to see them through the eyes of someone a bit more native than ourselves. Thus, my favorite fantasy stories are usually those that let me imagine not just the story, but to spin my own little tales about what orcs are up to on their days off, or whatever else.

I’m also a sucker for deeper meaning. My Verin Empire stories are all about the present trying to pull itself free of the past, for example. Fantasy allows the sort of conceptual stories we all see every day to be told in more concrete forms than we typically find in the real world.

Galvatron glares down at me from one side, and Imperial Stormtrooper helmets from the other. My office is a mess, and sometimes when I feel stuck I try to neaten things up a bit. That effort usually loosens the gears and helps write again, but it somehow never results in my office being less messy.

If you could live anywhere other than where you are, where would it be?

I lived in Okinawa for years, on the edge of a beautiful jungle, surrounded by flowers. It was pretty great, I loved living in Japan, and Okinawa is particularly lovely. Taipei has been my favorite big city, and it’s close to some of the best tea in the world, so that’s a strong draw too. On the other hand, most of my friends live just north of Washington, DC, so it’s hard to say.

I suppose if I could live anywhere, it would be in some sort of nexus from which I could step out into anyplace in the world. Perhaps in a TARDIS, although those often seem to wind up dumping people onto terrible planets full of robots, or bees, or robot-bees.

When you are writing, tell me about the emotions that are running through you and what it takes to work alongside them.

It all depends on what part of the book I’m writing, and what stage I’m in. At the beginning of the first draft, it’s all thrilling possibility. Towards the middle of that draft, I tend to get frustrated with it, and towards the end of that first draft, I hate it, and I remember a line from Douglas Adams, that writing is a pastime akin to banging one’s head against the wall, but with less possibility of reward. Then when it’s off to the editor, I re-read and am caught up in the possibility again. The editor’s commentary is always a blow, but it helps me come up with a plan for fixing everything, and hope begins to blossom once more. By the end of those major rewrites, I start to feel like it’s all hopeless again and then something just clicks together. The final major edit on the climax is pure magic and giddy, exhausted delight.

You’re going to go back and visit yourself when you first started writing, at whatever age it was, and you can give yourself one piece of advice. What would it be?

“Hey, it’s you. I’ve come back in time to tell myself that if I get the chance to go back even earlier in time, tell me to start taking this seriously earlier.”

There are lots of little things, but beyond that, it’s hard to think of one big thing. I wish I’d put something in my author’s note about the importance of reviews. I wish I’d made more effort to advertise Gedlund, particularly when it was named to Kirkus Reviews’ Best Books of 2016. I wish I’d invested in making a bigger initial splash rather than building up content. Those are all little lessons learned though, and I’m not sure advice, even from me, would have gotten me where I want to be without doing each of those things wrong first. I’ve always been bad at taking advice.

If you could choose any other writer, living or dead, to be your mentor, whom would you choose and why?

That’s hard to say. I’ve never really had a mentor, so it’s hard to pick who would be a good match for me. I’m terrible at taking advice, but people also frequently seem to have a strange impression that I know what I’m doing, even though I never do. That being the case, I suppose one of the dead writers would be best, as mentoring me would impinge less upon their schedule.

Everyone has at least one specific challenge that holds them back. What is that challenge in your work and how do you overcome it?

I tend to obsess over getting things just right the first time. Word Processing makes that habit superfluous, but I do it anyway. I’m not sure I do overcome it, and it really bogs me down sometimes. I have a small sign by my desk that shows Charles DeMar’s classic advice from ‘80s classic Better Off Dead, “Go that way, really fast. If something gets in your way, turn.” It hasn’t really cured me, but sometimes it helps remind me to leave something for later edits. 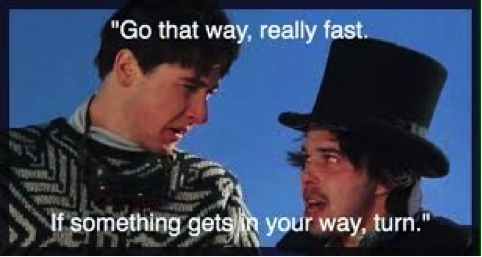 Without giving any spoilers, what is your favorite thing about this book?

With The Great Restoration it was important to me that it embrace believable 19th century stylings without glossing over a lot of the reality of that world. I wanted to show a society that was slowly but constantly progressing, rather than only shaped by the few great men and women histories are usually written about. Classist divisions and other lingering bad ideas that are slow to overcome, new technologies, economic up and downs. I wanted to give it a concrete reality that felt historically grounded, even though it’s an entirely made-up place.

You are forced to pick a fist fight with one of the characters in your book. Who would you choose and why?

Dolly Dench. That guy’s a jerk and I think I could take him in a fight. Plus, he doesn’t have any real friends, so I don’t think there’d be any consequences to worry about.

What element of this story can we expect in your future work?

There are elements of my next story mentioned in bits and pieces in The Great Restoration, but in truth I prefer to keep my stories as stand-alone narratives. My goal is to have a series where each story bolsters the whole, but that each book should be separately satisfying even without having read the others. I also like to change styles a bit between each narrative, so the first was a war story, the second a detective story, and the third will be a sort of Western. That’s a terrible marketing plan but being self-published means I can make those sorts of ‘mistakes’ if it results in better stories.

Aside from the minor references tying together the continuity of setting, a central theme of my Tales of the Verin Empire has been about the present pulling away from the forces of the past and that continues in the next book.

Do you have a celebration that you embark on when you finish a book, be it a release party, a trophy, or even a shot of whiskey?

I’m a huge tea nerd, so I celebrate with rare tea. I have a few special ones set aside for when I feel like particularly rewarding myself – some aged Honey Jialong, a bit of wild-picked lightly-smoked Zhenshan Xiaolong from Tong Mu, or maybe some of that really amazing aged Qimen we found in Shanghai.

Other than that, though, not much. I’m often told I should do more to celebrate things (I don’t really do it up for birthdays or other occasions either), but I’m a slow writer and so instead of celebrating I tend to try to get a leg up on my next project by starting in with my grumbling about how little of it I’ve gotten done since finishing my previous book a few moments earlier.

Speaking of which, you would not believe how little of that next book I’ve written while doing this interview! Well, I suppose you might have a good guess. I feel terrible about it, but there it is. Or rather, isn’t. The hardest part of self-publishing is being my own jerk boss, and I have to work to earn permission from myself to sip the good tea.

Thanks for the questions!