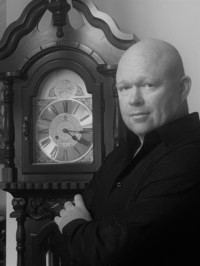 Christian W. Freed was born in Buffalo, N.Y. more years ago than he would like to remember. After spending more than 20 years in the active duty US Army he has turned his talents to writing. Since retiring, he has gone on to publish 20 military fantasy and science fiction novels, a children’s book, a book on writing and his memoirs from his time in Iraq and Afghanistan. His first published book (Hammers in the Wind) has been the #1 free book on Kindle 4 times and he holds a fancy certificate from the L Ron Hubbard Writers of the Future Contest.

I started a long time ago with goofy comic books. I blame the original Star Wars and the Ralph Bakshi version of The Lord of the Rings. I was still young when I saw both in theaters and I was hooked after that. The Army got in the way of my writing for a while, though I managed to crank out a few books during my time in Korea, Afghanistan, and Iraq. I figured I needed to keep writing just to stay sane. 25 novels later here we are.

The biggest appeal to me is being able to create at will without anyone saying ‘that can’t happen’. I’m a trained military historian and have no patience for so much research. In my books, if I say a space dragon eats a planet, who can argue?

My favorite part of writing my latest book was being able to take my combat experience from Afghanistan (along with their tribal cultures), combine it with events happening in the Syrian Civil War, throw in a little mythology, and drop a squad of marooned Space Marines right in the middle of a civilization with 17th Century gun powder tech. Was that saying too much??

4.If I were stuck in a room with your main character, what would we be doing?

Trying to figure out how to get away… seriously though, I would feel right at home from my 20 plus year Army career. We NCOs need to stick together after all.

5.When you are writing, tell me about the emotions that are running through you and what it takes to work alongside them.

Believe it or not I generally remove emotions from most aspects of my life. Not sure why, but it’s a gift. I can detach and execute my tasks without having to struggle through doubt or the feeling of giving up. That might just be my age and experience speaking to me, or maybe I need to have one more bourbon.

6.Everyone has at least one specific challenge that holds them back. What is that challenge in your work and how do you overcome it?

My greatest challenge is struggling to stay motivated enough to finish the book I am writing before that next idea becomes too much to ignore. I’ve written 25 novels and several short stories, with plans for at least another 15 books jotted down. All those characters and stories are competing for ‘me time’ and I only have so much to share. Fortunately discipline has been instilled in me from a young age and you don’t rise through the ranks in the Army without adhering to it. When it doubt, I fall back on that.

7.You’re going to go back and visit yourself when you first started writing, at whatever age it was, and you can give yourself one piece of advice. What would it be?

Trust your gut and don’t be afraid to take risks. Nothing good comes to those who sit back and wait for it.

8.Let’s talk about tools. Do you have a word processor that you would tell us to use? Is there a certain computer that has become your favorite? What do you look for in a keyboard? What would you absolutely have to have if you were to sit down and write your next book?

A word processor? Like the post typewriter ones? Man, I had one of those back in the 80s and thought it was the greatest thing. Of course, I hand wrote every book until around 2013. I’m not big on fancy programs or tech. Give me a quiet place to sit and write on my laptop and I can roll with it. I have two quirks though. Whenever I begin to outline my next book I spend the afternoon at the Barnes and Noble café. When I put the end on the last page I take my handwritten sheet with chapters and scribbles and burn it with a good cigar. Don’t change what works, right?

I’m a simple man. I have an office surrounded by a wall of books (almost 700) on one side, the American flag and the framed replicas of the Constitution and Declaration of Independence on the other. The only bad part is the downstairs bathroom is connected to it. Whoa be unto me when someone wants to visit for that!

Do my dogs count? I have two Bernese Mountain Dogs that not only helped me adjust to life after the Army but have helped calm me down when I need it- nuff said on that. They have been constant companions for almost a decade now and I find moments of enlightenment when we’re moving through the woods or chasing squirrels. Ok, I don’t chase the squirrels…..

11.If you could live anywhere other than where you are, where would it be?

Huh, I have been around the world so many times already. I spent 5 years overseas and have been to close to 20 countries. There is no place like home however. Right now I am in the middle of North Carolina but would like to head to either Charleston, SC or Saint Augustine, FL when the kids are gone and I don’t need to play Dad every day.

12.You have a chance to hang out with any literary character for one day. Who would it be and what would you do?

King Arthur. Not only was he tormented by Fate, but he was forced to overcome so much adversity in his life. Did you know I had a relative who was a knight in England around that same time period? Pretty cool. Can you imagine what it must have been like? I’ve always been a warrior and come from a very long line of them. Just imagine leaving Camelot and going off to save this or that.

There are so many to choose from its hard to narrow down. I am a man who has very little favorite anythings so I really don’t think I could choose. Can I get a group of them? I recently got a review for my Dreams of Winter: A Forgotten Gods Tale #1 that compared me to Steven Erickson and George RR Martin. Fantasy fans know who Martin is- even if they only watched the HBO show, but Erickson’s Malazan Book of the Fallen has been a constant inspiration for almost 20 years now. Those are pretty quality names to be associated with.