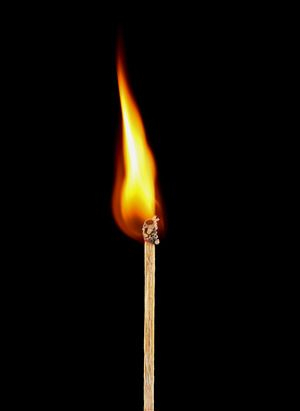 The fire is eating the apartment complex and my little brother is inside.

When we were kids we lived in a two-story house. It was old and there were wall heaters standing around unassuming on each floor. They were tall and thin, tight against the wall. They were a dark green color with a surface that was slick and mottled. A vent ran the length of the thing and at the bottom, a small door that never opened. There was one in the living room and one on the floor directly above it at the top of the stairs.

One night, me and my sister were at the kitchen table playing a board game I was losing. My stepfather was sitting at the table talking to my mom, who was cooking dinner. Suddenly a swooshing noise bellowed from the top of the stairs. There was a pause and then a scream.

My baby brother had been walking by the wall heater when it kicked on. There had been a gas leak of some kind and gas had built up inside the heater. When it kicked on, it spat fire in one great belch. He had been at the top of the stairs dragging a blanket behind him with Mickey Mouse and the gang printed on it. It had caught. After the scream broke the air, my stepfather raced around the kitchen table and to the bottom of the stairs with my mother coming up quickly behind him. He saw his baby at the top of the stairs surrounded by fire holding a blanket that was wreathed in flame. “He looked at me through the flames,” he said later. “I will never forget the look on his face.”

My stepfather took the stairs in two steps. He grabbed his screaming child, turned, and threw him down the stairs to my mother. When I think of the trust it took to toss his child through the air like that, I cry. He immediately stomped and beat the fire to dead embers.

My brother soared through the air and into my mother’s arms. She took him to the bathroom sink and turned on the cold, washing his arm in it. My stepfather came down and ran to his room. He came back ripping a white t-shirt to ribbons. They wrapped his arm and flew away with him. I will never forget it. It is burned into my mind. I can see his face now as they whisked him away. He turned to me with this look of horror. He was keening in pain.

He had third degree burns on the back of his hand. He had to do physical therapy to get full mobility in it. He carried a purple scar for months, then it went red. It stayed that way for years until it faded to almost nothing.

We had a fireplace when we moved to Missouri. We couldn’t afford gas heating for many winters, so we relied on the fireplace. My brother used to stare at the flames. I always wondered what he saw, and what he felt as he watched the fire consuming the popping, gasping logs.

Tonight I heard his apartment burned down, and he and his girlfriend and their unborn son nearly died in the flames. He has burns on fifty percent of his body. When I heard about this, I heard him scream again. I saw his face.

I hate this man. I hate him with all of my body, spirit, and mind. Many times I have wished him dead. He is a child molester and that makes him a monster. He is not seeking treatment. He is not admitting it to the world. And he is having a child. He is having a victim. I want him dead. But tonight I heard that his demon came back to get him. His fire spirit came calling his name again. And it nearly got him this time. And I am back in that house playing that game, listening to the swooshing noise and hearing him scream.

He must have been so scared.

I remember when we were kids. Me and Lisa had so many demons. And sometimes when our parents were gone, she would listen to her music for hours. She would come out of her room after a while, like a bear coming out of hibernation. Angry and hungry. She would look at us and we would see how angry she was. We would see her steaming. She would start picking at us, and soon she would rage.

She would throw things and chase us, wanting to hurt us. But mostly she wanted to hurt him. He had never suffered at the hands of Dan. He had no idea what she had been through. He was mom’s shining little boy, and a part of her has always hated him for that. I would grab him and we would run to the bathroom and lock the door. She would beat on the door screaming and roaring. She would try to pick the lock to get to us. And he would crawl into the bathtub and curl up in a ball and cry. He was afraid then. The look on his face, the madness in his eyes. He was terrified, and I would look at him and vow to protect him, to keep him safe.

He was scared in that fire. Scared for his life. And for that of the ones he loved. His demon had come back for him and it was taking them, too. Did he cry? Did he scream? Did he face it? Look it in the eyes and beat it? Or did it beat him?

Now the community is falling in around him. He will get donations. He will get a hand up. He will be on everyone’s prayer list. The family will surround him and lift him up. But I will stay away. I will continue to hate him. To hold this against him. I am the keeper of rage and hate for this family. The others have given it up, but I am still outraged. I am still thinking about the child down on his hands and knees with a bowed head crying. No one should get away with that. No one.

I wouldn’t have gone to his funeral. This tragedy he has suffered doesn’t change what he has done. It doesn’t wipe the slate clean. I still wish he was dead. That makes me a monster. Makes me subhuman. You will all look down on me for it. I don’t care.

One thought on “Lost Confessions: Fire”