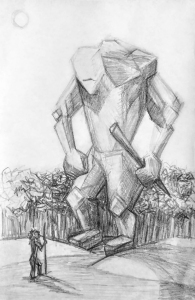 In the afterlife of the mountain, or the Death Dream, if you are the Blood of the Lion and you so choose, you can find a hidden path. That path will take you to a city locked away by the shamans, a place of banishment, a place forbidden. The City of the Elephants is here. Home to the unkillable warriors. Home to the monster Phose Modo. No one wants to go there. No one wants to face that horde or look into the maddened eyes of their king. But if insanity or circumstances beyond your control ever forced you down that path, you would have to face the Guardian of the Path.

I got the idea for the Guardian in 2004. I had gone through all the therapy. I had found the woman I wanted to marry and she had agreed. I was writing fantasy novels, and with all the drama out of the way, my mind was set to work on other things. One of its pursuits was this entity.

I knew he was a warrior set there by the shamans and imbued with powers beyond a mortal man. I knew he was dedicated to keeping the world from ever having to face the evil of that city, and I knew I wanted to write him right then.

I was working on Chaste. The first draft of that book was 776 pages long, and I was about 400 in. I was at a point where I was sick of my story and wanted more than anything to escape Chaste. It had become a drudgery and I was fed up. I wanted this new book. I wanted to work on my guardian.

I had floated the idea of working on a second book by Bekah before, and she had been adament that she would not allow it. The projects I started, I would finish. It was the law of the house. So, with the Guardian on my mind, I went back to the town of Chaste. I set my greatest desire aside and went to work.

When I finished Chaste, I flirted with the Guardian again, but the time was not right. I was more than ready to dig in, but there was a book that happened before the Guardian, and an entire world to build before I could do the character justice. I needed the world. I needed to work.

It was seven years before I headed down that path again. Seven years of thinking of the day I would write the Guardian of the Path. Seven years of seeing him vague in the distance. Lurking, hulking, slithering and roaring, out there, out of reach was the creature I had been obsessed with for years. But I had work to do.

The series he belonged in was fledgling. I had to build up to him, had a lot of story to write. I couldn’t rush it. So in 2012, in the second book of the series I began to build a myth. I started the rumor of a warrior who could not be defeated. I began the very first inkling of the elephant warriors. I needed to build, I needed to work.

After that book was finished, my world split in two. A second series opened up and I needed to explore it. It was part of the larger piece, and in order to get to the path, I needed to fight my way through that second series. I worked, I fought, and I began to lose a bit of myself with every word that was not about my Guardian and my Path.

I loved the work. It was my life and the greatest thing I had ever been a part of that didn’t wear diapers, but the more I wrote, the further it moved. Because now the story was branching again. My story was splitting. I started a new series that was part of the puzzle, and with that new piece, I was opening another door that was not the Path or my Guardian.

Each series I closed out was a step toward my dream of writing this creature. Every step along the way I was earning it a little more. I learned there is a journey to a great scene, a winding road that must be taken. You can’t just jump ahead and write your favorite scenes. You can’t skip all the work and go straight to the win. I had more work to do.

In the end, the Guardian did not show up until the second-to-last book in that series, which happened to be the twenty fourth book I wrote. Every word I had ever written had carried me to the hidden path to the banished city. Every word I typed had gotten me closer.

In 2017 I had a party. I had a regular group that met every Friday, and I baked a cake before they got to my house. It was a small affair. A few bites of a pumpkin molasses cake and a very short speech. Bekah saw the gravity of the night. One of the other guys didn’t even know why he was there. But of the three people who came that night, the two guys and my wife, every one of them was an artist.

The Guardian takes three forms: the leviathan, the colossus, and the man, and I begged them all to sketch out the three incarnations of the guardian. Each one took the time to do it. I framed them and hung them on the wall because I had waited 13 years to write that one creature. Had fought my way through millions of words and over fourteen thousand pages, all so I could write one character.

I learned a lot on my journey to the hidden path. I learned I had a tireless work ethic. I learned that both myself and my wife have untold potential for patience. But more than anything, I learned that if you want to write a piece, a book, a scene, or a series you have to earn it. You have to fight through it every day. Stay up past your bedtime. Cry a little. Bleed a little. And you have to live for it.

I wrote my Guardian. I struggled with him and I fought him. I encourage you to do the same.