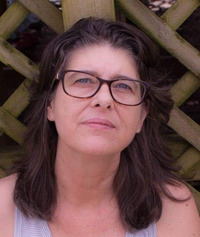 Sonia Rogers isn’t afraid of ghosts and goblins. At least, not in the daytime with all the lights on.
At night, however, in the dark…
That’s when ‘they’ come out and whisper stories in her ear.
She writes them down, because she’s afraid of what will happen to her if she doesn’t.
Besides that, she lives a perfectly normal life in Missouri with her husband and four beagles.

I have an office set up in our guest bedroom. I work at an old library desk that’s beat up and worn, but I love it! There’s an old Woodstock typewriter that sits in the corner to remind me how easy I have it with a computer.

Polterguys is so much fun! I love these characters, and when I find a new way for Ed to get into trouble it makes my day.

3.If you could live anywhere other than where you are, where would it be?

I wouldn’t want to permanently live anywhere else. I love living in the Ozarks, and nothing else matches the beauty we have here. Having said that, I wouldn’t mind a vacation home somewhere in the Caribbean…

4.If you are casting your protagonist in a movie, what actor would you choose and why?

I’ve had a vision in my head since the very first line I wrote in Polterguys of Matthew McConaughey playing Ed, except you wouldn’t know it was him. Ed has thinning hair with a bad combover and a paunch. What’s funny is that I’m not really a McConaughey fan, but my brain keeps telling me that he’s Ed.

5.If we reach beyond the written word into visual media, and you could choose how your story is consumed, would you want a television show, a movie series, or anime to tell the story of the book and the world it takes place in?

6.You are forced to pick a fist fight with one of the characters in your book. Who would you choose and why?

Definitely Ed. Even though he played football in high school, he’s kinda turned into a wuss.

Ghost would be the man for a robbery. He’s smart, thinks outside the box, AND he’s a computer hacker! What more could you ask for in a partner if you’re going into crime?

My biggest challenge is finding the time to write. I watch my grandkids during the day, so I get up sometime between 4 and 6 to get a few hours of solid writing in before they get here.

9.If you could choose any other writer, living or dead, to be your mentor, whom would you choose and why?

It would have to be Stephen King, I guess. Even though my obsession with horror started before he started publishing, once I picked up one of his books, I was hooked. Picking his brain would be the ultimate joy for me.

10.Can we expect an audio book from you, and if you had the ability to choose anyone to narrate it, is there someone in particular you would hire?

I would love to do an audio book. I have the opportunity to do one soon, and local actor Jerry-Mac Johnston has kindly agreed to test read for me.

11.The audio book sector is exploding right now. Have you been listening? If so, can you recommend an audio book to us?

I’ve tried to listen to a few. Some of my favorite authors have released some, but audio books just don’t do it for me. It’s not the same as reading those words on the page and holding a physical book (or ebook reader) in your hand.

12.Do you share any vices or habits with any characters in your book? If so, what are they?

I’m a smoker (shhh… don’t tell anybody, it’s almost a crime these days) and one of the characters in the book smokes. Lou doesn’t smoke at home because her dead husband Sam doesn’t like it, but she likes to ‘step outside to check the weather’ on occasion when she’s working at Ed’s place.

13.Why storytelling? What made you yearn to tell a good story, and how long was this story within you before it came out?

I have a very vivid memory of telling my teddy bear a story when I was around 5, so I think I must have been born with the notion that I’m supposed to do this. I’ve dabbled in writing over the years but didn’t take it seriously until I turned 50. Now, I’m trying to make up for lost time.