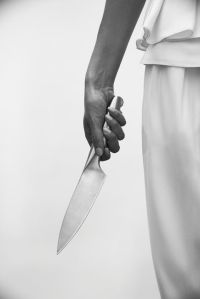 You’re not going to fucking believe this. Shit I don’t know if I do. I wasn’t going to blog about this at all, but I figured I had already drawn you in with the first few, so I might as well put out the final entry on this subject. After this one, I am done on this matter.

A few days after the last entry Jack walked into the bedroom where my wife was sleeping. He leaned over the bed and stared at her for a long time. I don’t know exactly what was going through his mind and I don’t ever want to know what happens in that mind of his. He touched her very gently on the chest and she awoke to him looming.

Jack whispered, “He is not a who. He is a what. He is a spirit of dark. He has something in his bag for us.”

She said this sounded terrifying and she asked right away, “What is it?”

“An accident,” he said. “When he opens up that bag, he will give us a horrible accident. We will suffer.”

She was quiet. Didn’t say a word. Thinking and thinking before he spoke again, “I think I can scare him away.”

“Do it!” she said without a moment of hesitation. Then Jack went away.

I haven’t seen the guy in the living room since.

A long time ago we were told by a professional that when certain things are accomplished, things should be given as “payment.” Let me say that again. When certain of us do some great feat or are a boon to the system, then they should be rewarded. Not all of us, mind you. Some the “higher” forms are given praise and nothing more. The higher forms being: Artist, Guardian, Servant, Elder, Shade, Informer, Conductor, Tier, Esper. Us “lesser” forms: Me, Jack, Teth, H, Adam, Lenore, Prince are given bribes when we accomplish some difficult task. The thinking is that “They” (Bekah and the higher forms) don’t want to lift us up to a level where we would be able to lord anything over them, so instead of giving us affection and verbal praise, we get a, “What do you want?” It is really fucked up.

So now that this thing has been done, the trick was finding something to give Jack as a bribe. Theory had it he had saved us from some horrible accident and they needed to give him a gift.

They ended up getting him a knife. It is a chef’s knife, a fifty dollar knife that will sit in the kitchen and wait to be wielded by Jack. None of us are allowed to touch his fuckin’ knife, even to clean it.

See, Jack loves to cook. He says it is the most grisly thing people do on a regular basis. He says all the chopping, and slicing, and skinning, the boiling, the steaming, the frying, all of it is very brutal and reminds him of the act of torturing someone. Now he has a knife. He licked the blade the moment he opened it. It was disgusting.

But I have meandered off topic. This is what I am asking you to believe. There was a figure who seemed like a ghost in my living room. It had with it a bag. Jack, who lives on a strange plane of mind, said it was the spirit of accident. That it was going to cause one of the people in the family to have a great and horrible accident. And that with the help of someone who doesn’t want to be mentioned, Jack was able to scare that spirit away.
Can you believe me? If not, then this is just a story. Thanks for humoring me. I am done talking about this.